Opening just 4 applications, and Adobe Illustrator gave me this warning sign. The computer has 2gb of RAM and sometimes I still get shown this ridiculous dialogue box.

Windows XP is so amazing in the wrong way.
Posted by Parka at Sunday, December 16, 2007 2 comments: 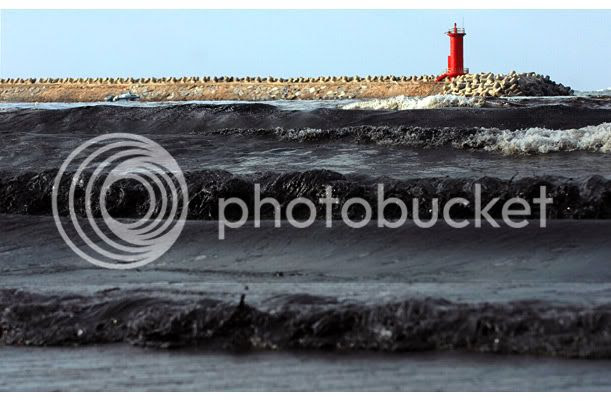 One of the scariest photos that look like it's from a movie, except it's not.

Steve Rude is an incredibly versatile artist, and it shows in this book.

There are over 300 illustrations and more than three dozen photos in this book. It's also one of the better art-book/biography book. The text is really in depth and gives a clear understanding of Steve Rude's life, and career.

The book leads off with an introduction by Mike Baron who talks about how they met and their working relationship. Then there are 14 pages of interviews with the Dude himself. After which Steve talks about his influences and what got him into art.

The rest of the book is his amazing collection of work. There are commission pieces, sketches, line drawings, fine art, Nexus comic covers and animation. He uses a lot of medium, after a while you'll lose count. Every illustration is captioned by Steve Rude himself. Every piece has a story to tell.

This book is an impressive showcase of his work and talent, and a wonderful read.

Visit the link beside to read more reviews on Amazon. If you buy from the link, I get a little commission that helps me get more art books for review.

Check out other books reviewed on this blog, with pictures:
Art book list | Design book list
Posted by Parka at Saturday, December 08, 2007 No comments:

On day 3, we drove up north to Eumundi Markets. It's a market place where traders all over Australia gather to pender their wares and services. It's only open on Wednesday and Sunday morning to afternoon.

It took about 1 hour to drive from Surfer's Paradise. The best way to get around in Australia is to rent a car. The roads of Australia are very well paved and very good for driving.

Eumundi Markets is my favourite tourist spot for this trip.

I love entrepreneur spirit that's in the air. All the stuff sold were made by the merchants themselves. You won't see anything made in China.

There are stuff like ginger beer, coffee beans, face painting, pipe blowing, massage, tarot card readings, camel riding and so much more! It will occupy you the whole morning. It's busy with people and buzzing with activity. Visitors to Queensland should mark this place with a thick marker on the map!

Lunch was at Maleny, a very beautiful idyllic small town locate on the hillside of extinct volcanoes. The scenery along the drive up and down the winding hillside road is breathtaking. You see the city area and the sea far away and how the clouds cast shadows on the cows that are grazing in the farms.

Here you get to wine and dine with by the huge windows overlooking the countryside scenery.

Again, I ate another ton of seafood. Well, this is Australia. The oyster at the top left of the photo actually has Char Siew on top!

This is the catch of the day, a grilled snapper.

Another beautiful town Montville is just beside Maleny. Both towns are popular for their art galleries, craft shops and pubs.

Dinner's at Hunt By The River. They have a limousine pickup service for dinners.

One thing about the way prawns are cooked in Australia is, they are a bit crunchy in a non crunchy way. It's like steamed prawns where the meat is sweat and each bite is firm. The prawns I ate had the crunchiness that is similar to biting a pickle.

The beach is really clean and the sand really soft. So soft your feet actually sinks in walking on it.

Next up, we head to Warner Brothers Movie World. It's a pretty amazing fantasy theme park. The buildings were simply beautifully designed, crafted and built.

Be sure to watch Shrek 4D Adventure while you're there!

The queue for Superman Escape required a 45 minutes wait! Eventually we gave up and tried Lethal Weapon 4 ride instead. Haven't been on a roller coaster for a long time. My head was still spinning after the ride. For kids, there's a section in the park where the rides are a bit toned down.

The good thing about this park is, you pay one admission ticket and you don't have to pay anymore for the rides inside.

I saw Tweety Bird walking through the restaurant I was having lunch at.

We then drove on to Dracula's Haunted House at Surfer's Paradise.

Here's the owner Don Jolly explaining that how the props in the scare house were made. They were all self designed and they look very professional.

The house has a few levels of horror floors that visitors must clear in order to come back out. Additionally, you can test your courage by opening the Dare doors.

The journey ends back into the shop where you can then shop for interesting merchandise. We were told that Paris Hilton once visited the Haunted House.

Dracula's Haunted House is just located in the shopping district of Surfer's Paradise. Walking around, I found out there where were a lot of shops selling beach front properties like condominiums. There are lots of shops and pubs here to entertain everyone.

After that, we visited Q1, the highest residential tower in the world. The view up there is simply magnificent. Unlike the Empire State Building which was crowded like a bees' hive, the top of Q1 is incredible spacious.

There's a small cafe and bar at the top. Corporate functions can be held on the 78th floor for a price. First time visitors should probably make Q1 their first stop to get some orientation and marvel at how beautiful Gold Coast is.

Dinner's pepper beef at local favourite Ashmore Road Seafood and Steak. That's before we head off for the nature walk in search for glow worms.

It's a one hour drive up to the subtropical rainforest where the glow worm caves are. Guide Amalee and driver Shane provided the entertainment along the way.

Amalee is actually a descent of an abroginal group. She started giving tours only 3 months ago. She shown us some native tools, weapons and flag of the tribe and explained the tribe culture.

All the days in Queensland:
Day 1: High Flying Queensland
Day 2: Live in a Warner Brothers Movie Trailer
Day 3: Eumundi Markets is Amazing
Posted by Parka at Friday, December 07, 2007 No comments:

If you have read The New Paper today, you'll find a travel story of Queensland Australia written by me. The trip was actually sponsored by Etihad Airways and Tourism Queensland. I thought it would be better if I can also bring everyone behind the scenes into Queensland by going into more detail.

It was a 4 day trip from 7 Nov to 12 Nov. There were four going on the trip, Karen from Straits Times Special Projects, Jocelyn from Edelman and Dahpne from Harper's Bazaar. 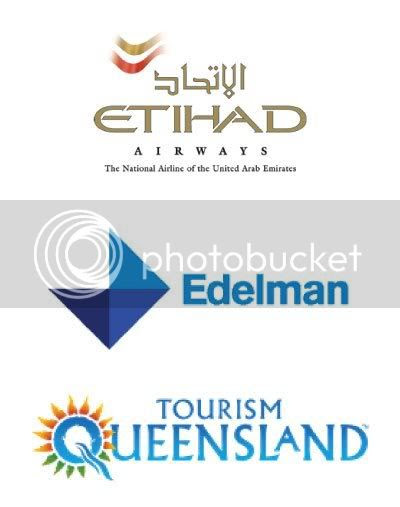 Etihad Airways is the national airline of United Arab Emirates. They have generously provided the business class seat from their Pearl Zone, which is priced over $7000 inclusive of airport taxes. It is very luxurious. They had a limousine pickup service for your flight. At Changi Airport, you literally have a red carpet reception while checking in. Seriously.

The seat can actually roll down into a fully flat bed, as you can see in the photo above. I'm 1.8m tall and there wasn't even any need to bend my knees. Just right in front is a 15" LCD monitor with your in-flight entertainment system. I watched "1408" , and it's a damn good movie.

The business class cuisine was served with warm porcelain plates. You'll have a selection of wine to choose from too. Flying on a plane cannot get better than this.

The flight to Brisbane Airport takes 8 hours. If you're able to sleep on the plane, it takes 1 hour. The little red dot below is the airport. Queensland is the north eastern state of Australia. 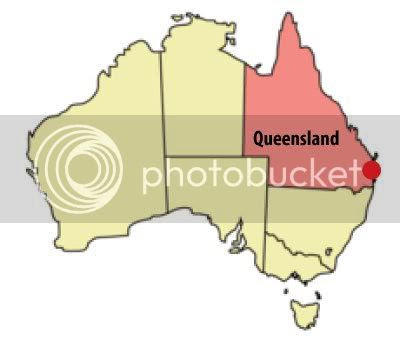 The best time to visit Queensland is during summer where the temperature is actually cool. That's from November to around March. It gets colder at night.

It was drizzling slightly when we touched down at the airport. Our guide, Jane Hodges, was already waiting for us there. We then drove about 2 hours to Conrad Jupiters hotel for checking in. The hotel is only 15 minutes away from the beach.

Next, we head off to Palazzo Versace for lunch.

This is the most expensive hotel in Australia. They even had light Versace perfume pumped into the air conditioning system.

The design of the hotel is very exquisite and elaborate. The pillows on the bed had to be placed in specific orders. The Imperial Suite you see above cost over A$3000 per night.

That's Michelle and Kimberly who showed us around.

This is us in the lobby. From the left, Jane Hodges, Jocelyn, Karen, Daphne and me.

Two waiters at Vie restaurant where we had lunch.

Just right outside of Vie is a calm marina harbour.

Immediately after lunch we took a champagne sailing cruise at the harbour. The beautiful yacht you see if designed by Elke and her husband Klaas. It's named "Heike" after Elke's sister who died in an unfortunate car accident. With the boat, they can bring her to sea with them.

This is Elke Kooij telling hilarious stories of guys who propose their girlfriends on the yacht.

Just over the breakwater is where those surfers were going. That's where the surf waves are. I also saw two dolphins but wasn't quite enough with my camera to snap a shot. If you're lucky, I was told, you can get to see whales too.

I managed to capture the ray of sunlight from behind the clouds casting onto Southport.

After that we headed back to Conrad Jupiter for the Zingara show.

The show's pretty long at 2 hours. It's a show with a little bit of everything. There's a musical with precision dance troups, comedy standups, laser light shows, optical illusions ending with a death defying motorcycle display. Photography's not allowed so I've used a publicity photo above.

For more of the photos I took in Queensland, check out my Flickr photo set.

All the days in Queensland:
Day 1: High Flying Queensland
Day 2: Live in a Warner Brothers Movie Trailer
Day 3: Eumundi Markets is Amazing
Posted by Parka at Friday, December 07, 2007 No comments: