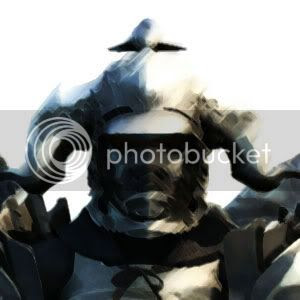 Not bad, if you're a FF fan. There are over 50 songs for download, for free. 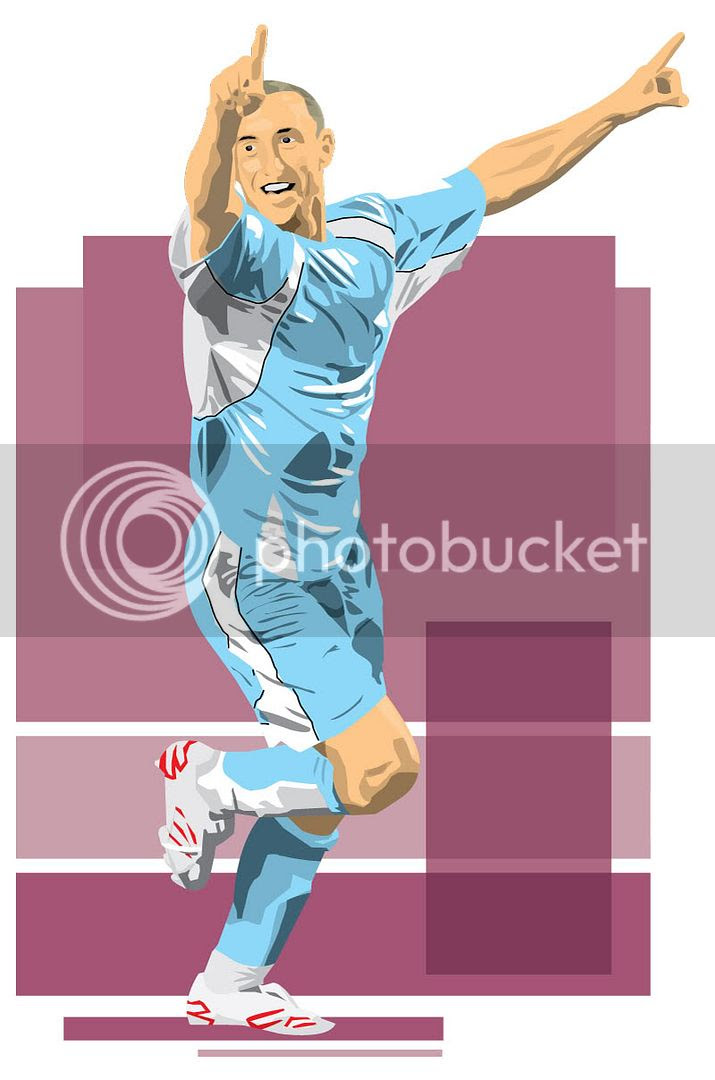 There was a launch of Halo 3 at Suntec City yesterday. It drew quite a sizable crowd.

As I'm writing this, I've already see a couple of full reviews floating in cyberspace out there.
Posted by Parka at Wednesday, September 26, 2007 No comments: 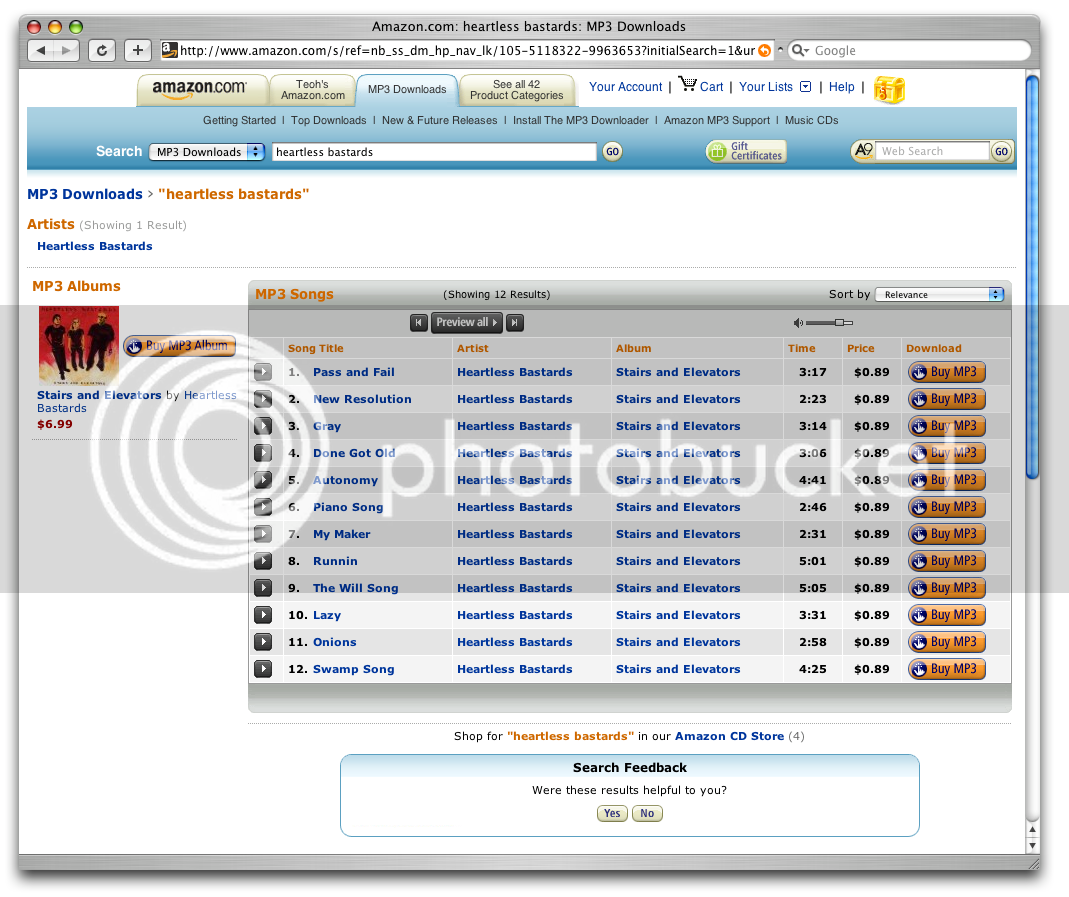 Amazon.com has just launched its own mp3 download site, offering them DRM-free. Yes, read that right, DRM-free. It means you can copy the mp3 onto whatever computers or players you want regardless of the number of times!

This is a global service so if you're armed with a valid credit card, you're set to go. You'll just need a US address when they ask you to register if you haven't already had an account there. You can copy a US address anywhere.

Prices for each song is around US$0.89 to 0.99 on average, which is slightly cheaper than iTunes.

Currently, the service has around 2 million songs and counting. I have no doubt that one day the number of songs will rival that from iTunes music store.

Visit Mr Brown's site for a slightly more detail walk-through on how to download.

Click here for a very very detailed walk-through from tuaw.com
Posted by Parka at Wednesday, September 26, 2007 No comments: 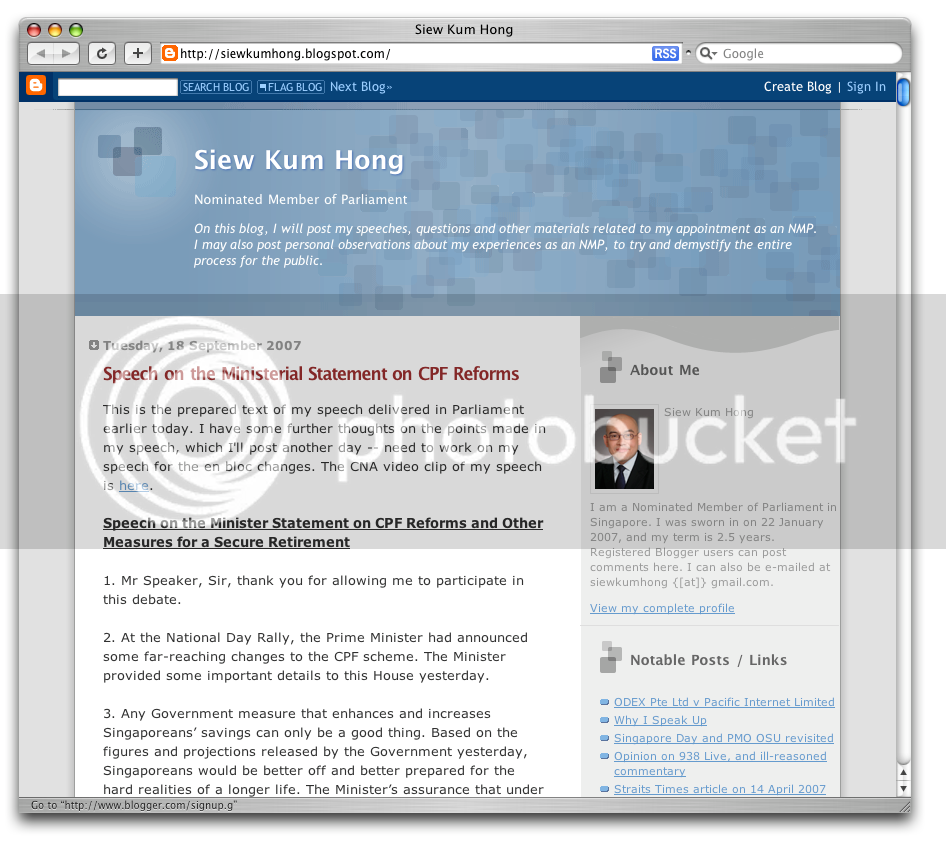 This Nominated MP has presented some very convincing and well written articles on issues surrounding Singaporeans. It is not often that you find blogs by people who play larger roles. It gives us a glimpse of how they think and more importantly, tell us what kind of person they are.

Click on the image to visit his blog.
Posted by Parka at Friday, September 21, 2007 No comments:

If you haven't notice, The New Paper has a small cartoon column called Tip Talk. It's a weekly cartoon that Tip Talk is based on 4 characters, from the Kopi-O Klan, whom Ernest Luis, the TNP Postman, would interview every week. They are punters who would make bets on the coming EPL matches.

It has gone through several visual changes over the years. There were pen & ink versions and vector style. The recent version is created in 3D. Tip Talk has been around for years and the character designs are already well established. I just had to turn them into their 3D form. We have Maya for doing that.

The modeling process took about one month. Then I had to put in the bones for the characters to enable them to make some simple poses. Below's a model of Pundit in the classic T-pose in a 3D environment. The T-pose is the default pose for 3D characters so that they can be posed easily. 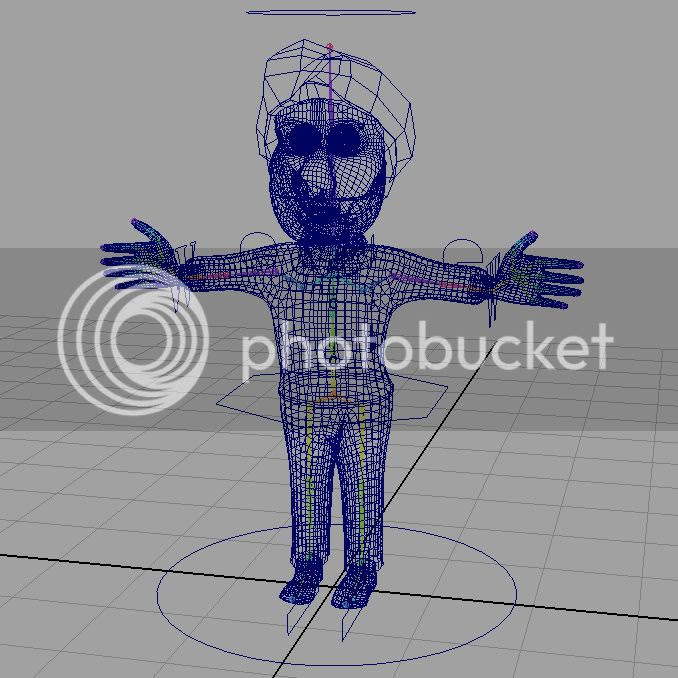 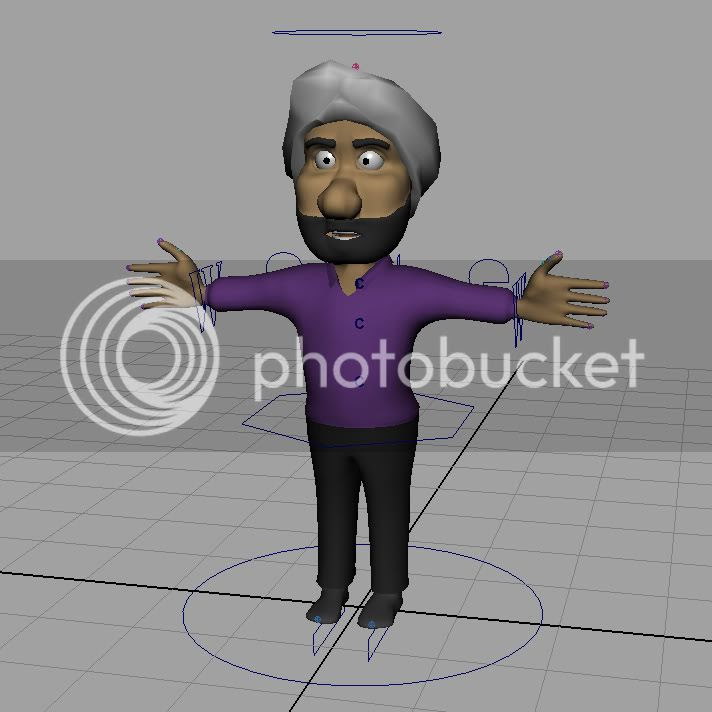 Modeling the set, which is the coffee shop in this case, took just as long. You can see that I've modeled quite a bit of props on the set. They just serve as the backdrop in the panel. 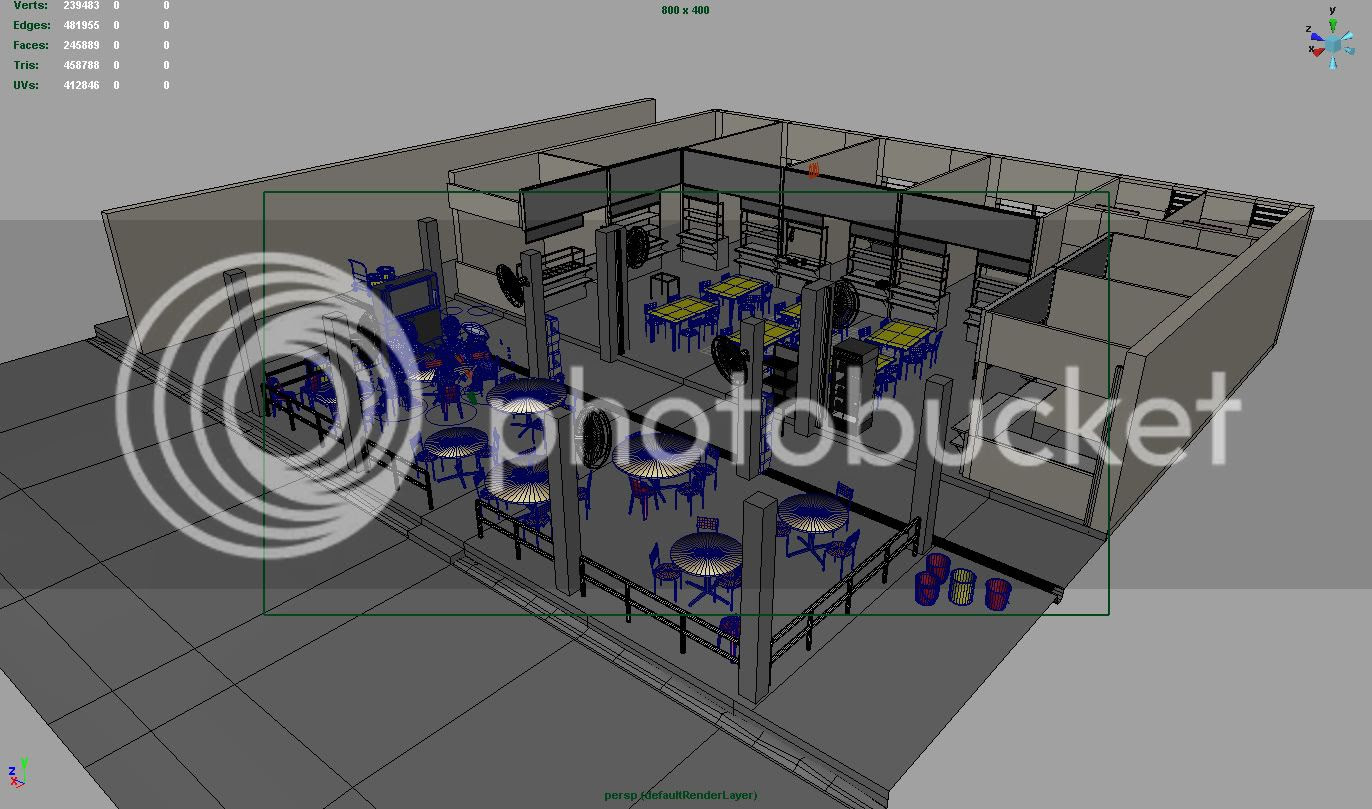 The advantage of 3D is after you have the models, creating panels is easier because you don't have to draw the characters anymore. You just have to pose them and render out a frame.

After squeezing his brain dry, Ernest Luis, would email me the content to go into the week's column.

Depending on who's appearing on the column that week, they will be added into the scene respectively. For this example scene, we have only Pundit, Mani-Kam Mani-Go, 3D Ernest and a guest character called Ah Pek, with his pet bird called Big Bird. 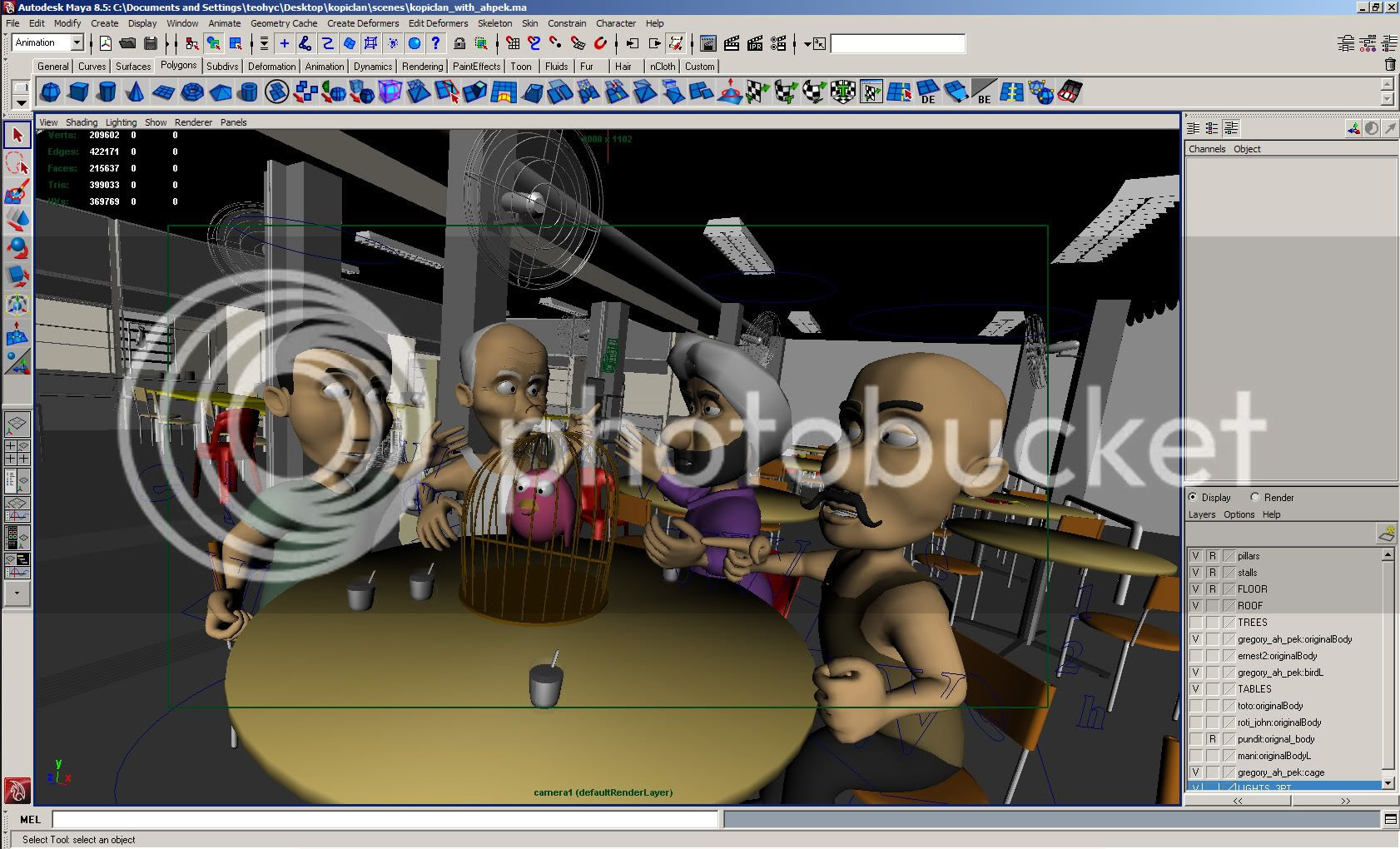 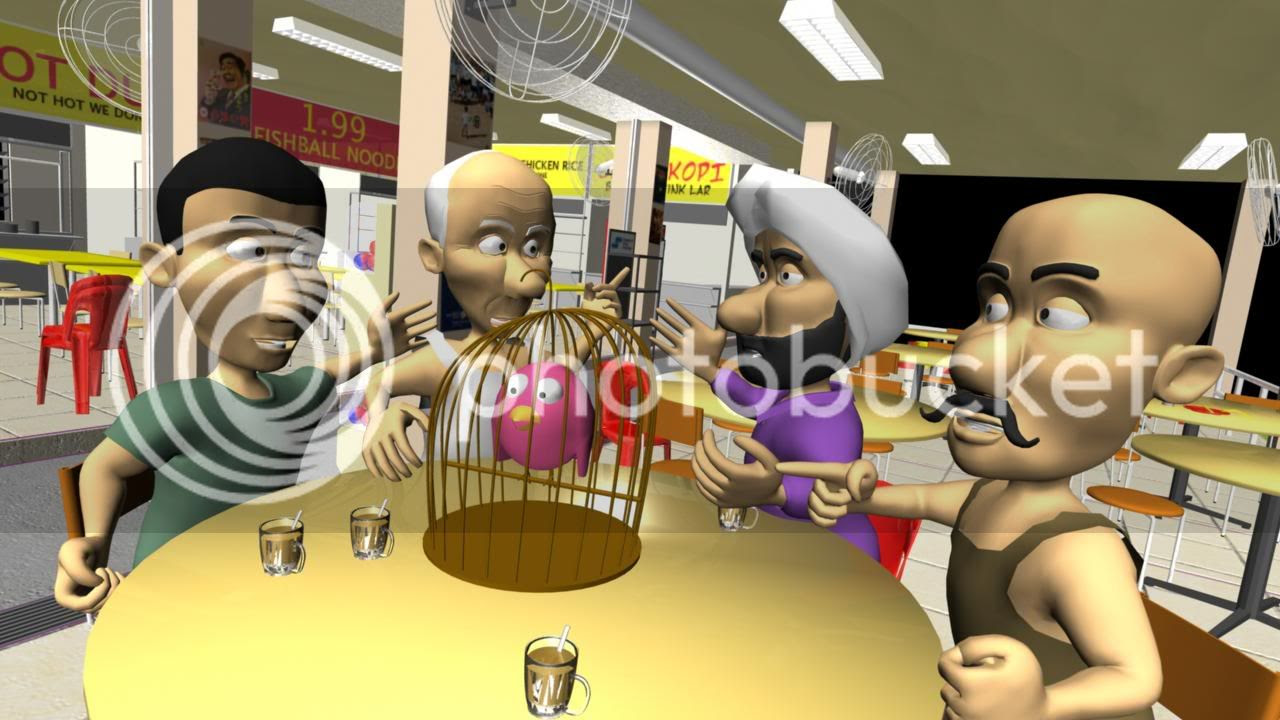 The characters are put into position based on the respective talking order. After which, I'll do a render at the size of half a TNP page.

Next, the rendered image is placed into a layout software for compositing and adding of dialogue. The finished layout will then be sent to the sub editors for proofing where they check for mistakes. If everything is alright, the column is placed onto the page with other content and printed. 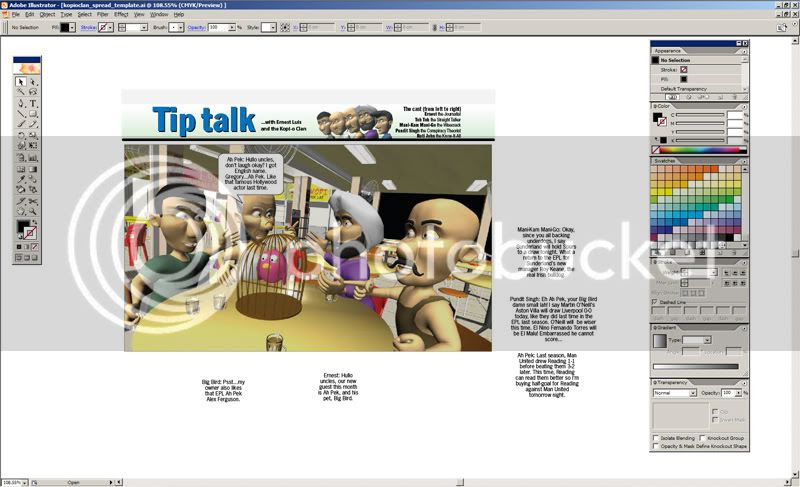 Days later, we'll get complaints from our readers saying that they lost money following their tips. Just kidding. 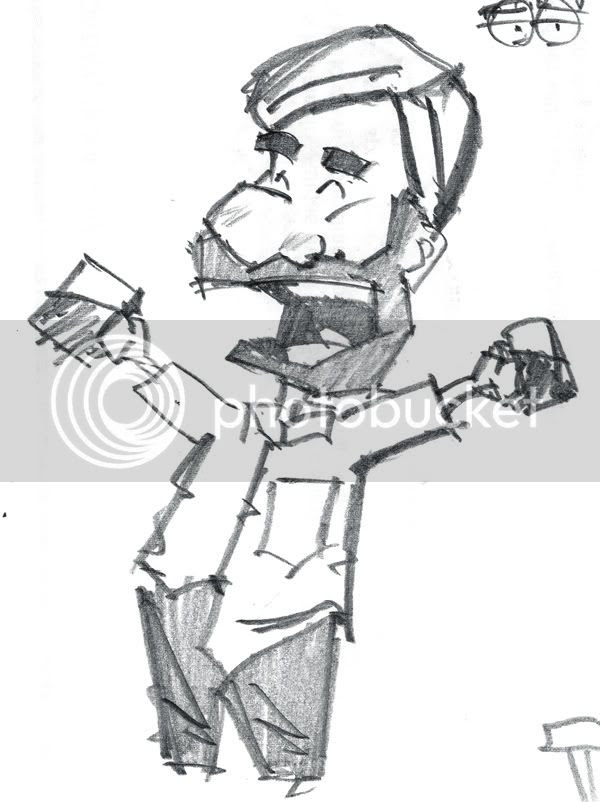 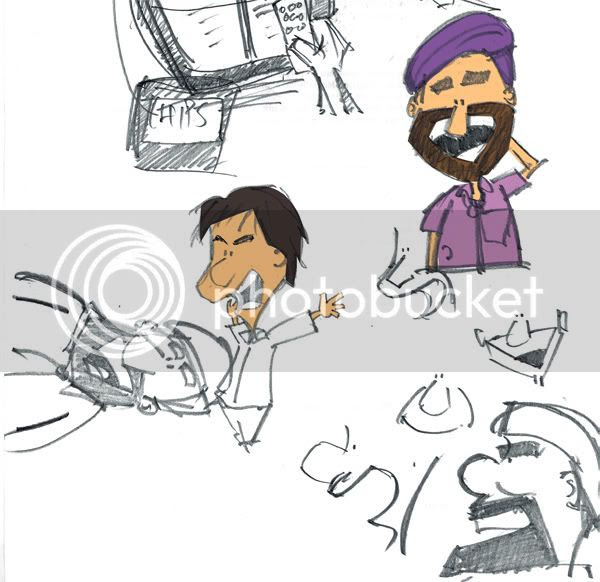 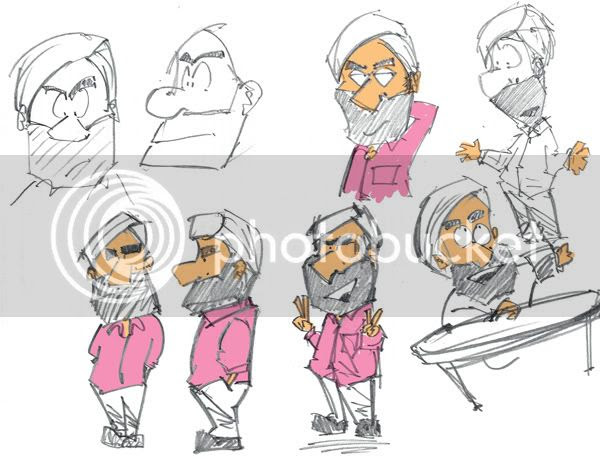 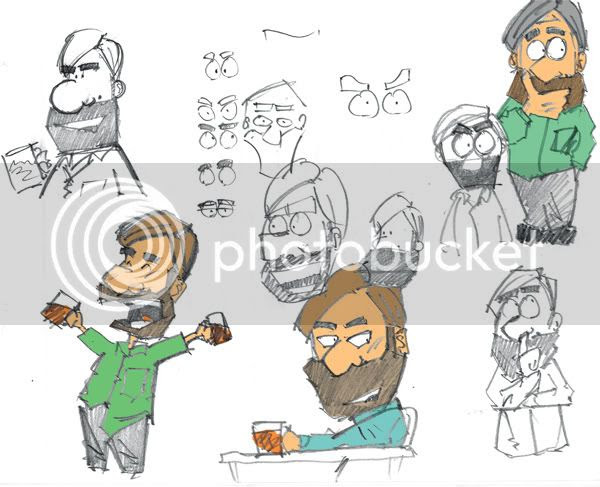 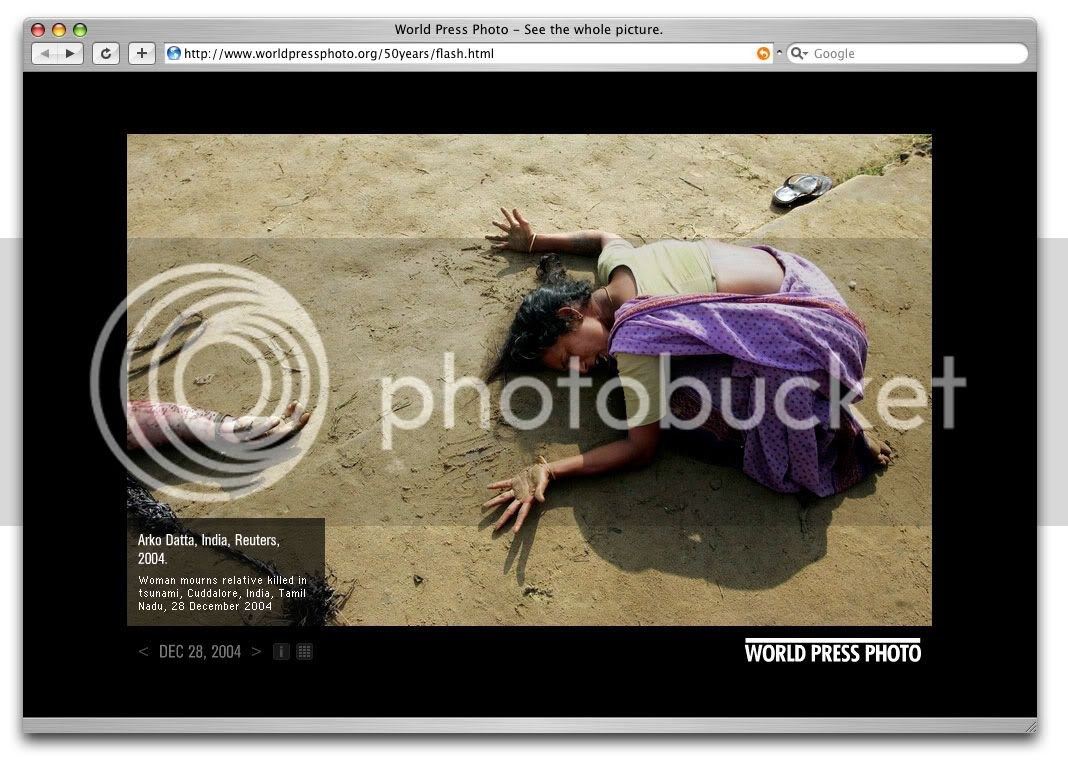 Great display of photos although most of the photos are a bit depressing or seek to depress. Whatever happen to happiness in the world?
Posted by Parka at Sunday, September 16, 2007 No comments:


It's not supposed to be a comedy but now it is.
Posted by Parka at Sunday, September 16, 2007 No comments:

In Central Park, a group of children having their afternoon soccer lessons while their mothers look on at the side.

Good times should not last long, for they can then be truly cherished. Above's the last shot I took in the early morning at Time Square before I left for the airport.

I've said it before and I'll say it again. If you can only visit one place in US, make it New York City.

For all the photos that I took in New York, visit my New York Flickr set.

All the days in New York City:
Day 7: Yatta! New York Time Square
Day 8: Getting To The Top of the Empire State Building
Day 9: A Day At The Museum
Day 10: Gold at Radio City
Day 11: New York Public Library is Grand
Posted by Parka at Friday, September 14, 2007 3 comments:

I never actually thought that a building could be made of gold, literally. Of course, that was me before I saw Radio City (wiki). Radio City is an extravagant music hall that's also home to the Rockettes.

The lobby roof is made gold plates! Not gold electroplated plates but gold plates! Everywhere you walk inside Radio City, there will be this constant shimmering gold. It's a gold mine, well, almost!

This is the hydralics that raises the stage above it. It has virtually no weight limit, as told by the seemingly estactic Radio City tour guide. The same set of hydralics were borrowed by the US Navy for their aircraft carriers!

This is dome shaped Music hall. As you can see, my camera lens isn't even wide enough, at 28mm, to capture the whole scene. It's nothing short of spectacular.

By the way, the curtains are sewn together with gold thread. They have only been washed once since the 30s during the restoration. Restoration was done on Radio City to remove the nicotine and smoke stains that have, over the years, accumulated. Radio City now is a non smoking hall.

Some 5 layers of nicotine were removed from the painting in the grand lobby. I can't remember how much those chandelier cost but of course they are expensive.

Oh, did I mention that Radio City was built by Rockefeller too? Stand in front of Rockefeller Center and make a 360 degrees turn. All the gray limestone buildings were built by John D Rockefeller.

This is the front of Rockefeller Center. That's where the ice ring is supposed to be during winter.

Walk inside to see the world's first escalator. Yes, first.

Everywhere in all the buildings are filled with timeless art pieces. Empire State Building might be the icon of New York City, but after the Rockefeller Center tour, you'll think otherwise. If Rockefeller built his buildings in gold, you'll probably have King Kong climbing them instead.

Went down to Pier 17 again. Not as happening as the other since it's Sunday evening. I guess people do need to work.

That's the moon over Brooklyn.

All the days in New York City:
Day 7: Yatta! New York Time Square
Day 8: Getting To The Top of the Empire State Building
Day 9: A Day At The Museum
Day 10: Gold at Radio City
Day 11: New York Public Library is Grand
Posted by Parka at Monday, September 10, 2007 No comments:

The Museum of Natural History (wiki) is perhaps the best museum in New York. There are 46 halls filled with exhibits ranging from dinosaur bones to a great Blue Whale hanging from the ceiling.

The numerous dinosaur exhibits takes almost a floor to itself in the museum. There were bones from land and the sea dinosaurs. The above were taken in the lobby.

There are hundreds of amazingly well preserved animals in North American Mammals Hall. Collectors, as I was told by the tour guide, had to wait for the animals to die before preserving them. The exhibits are as real as zoo animals except they don't move.

This is the T-Rex from the dinosaur halls. You would think that this Rex is smaller than the one from Jurassic Park. It is. The one in the movie can swallow a toilet if you remember.

The collections, not just the dinosaur bones, in the museum were so heavy that the museum had extra thick ceilings just to compensate the weight.

One of the several dinosaurs I've never seen before.

Check out the finger bones.

Some marine life exhibits. The fish from the second photos are not their real sizes. See the fish that looks flat and has tall fins on the top and bottom? That fish can grow larger Mini Cooper.

It would probably take a day or two to read everything in the museum.

Fish were not preserved but were instead models. It's not easy to preserve fish.

There's a section on all things rock and related to geographical history of earth.

Walk across the street to Strawberry Fields in Central Park to visit a small memorial for John Lennon.

Thought of the day:

Abercrombie and Fitch is probably the most crowded store I've been into. T-shirts are around US$25 each. Quality of the clothing is not bad too. You would have a difficult time finding sales assistants because they look like the crowd themselves, the late teens.

More importantly perhaps, is the successful marketing and image the store had established. Their slogan," The highest quality, casual, All-American lifestyle clothing for aspirational men and women."

The local shop I could think of, with that type of crowd per square metre, would probably be Charles and Keith. The A&F store was filled up to the third floor.

If you like business, read up more on Wikipedia.

All the days in New York City:
Day 7: Yatta! New York Time Square
Day 8: Getting To The Top of the Empire State Building
Day 9: A Day At The Museum
Day 10: Gold at Radio City
Day 11: New York Public Library is Grand
Posted by Parka at Monday, September 10, 2007 1 comment: